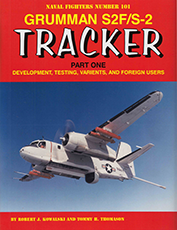 The Grumman S2F (S-2) was developed to meet a specific mission requirement, carrier-based antisubmarine warfare. It proved to be so useful and adaptable that it is still in military and civil service more than 60 years after it first flew in December 1952. Richly illustrated and personalized with Tracker pilot and crewmen anecdotes, Grumman S2F/S-2 Tracker describes its evolution from initial requirement to eventual replacement including unsuccessful Grumman proposals for improved versions. Its service in foreign militaries and adaptation to wildfire control are also summarized along with descriptions of the Carrier On-board Delivery (COD) and Airborne Early Warning (AEW) variants.