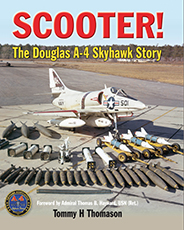 Few modern military aircraft can claim the longevity and overall success enjoyed by the legendary Douglas A-4 Skyhawk. Also known as the Bantam Bomber and Scooter, the small, subsonic A-4 first flew in the mid-1950s during an era of ever larger and much more complex supersonic jet fighters. The Skyhawk broke the mold, however, by becoming America’s first simple, low-cost, and lightweight jet-powered attack aircraft. Still in use today in South America, the Skyhawk enjoyed a 25-year production run.

A-4s achieved combat fame in the Falklands Islands War and the Vietnam War where one even scored a kill against a faster Soviet-built MiG. Used by the air arms of seven foreign countries as well as the U.S. Navy’s famed Blue Angels Flight Demonstration team, the A-4 Skyhawk remains a fascination for naval aviation enthusiasts nearly six decades after it first took to the sky.