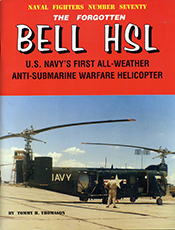 The Bell Aircraft Company won a Navy design competition in June 1950 for a helicopter specifically for anti-submarine warfare using a dipping sonar. This design, its Model 61, was the only Bell helicopter using the tandem-rotor layout; it was powered by a 2400 hp Pratt & Whitney R-2800-50 engine and to be armed with homing torpedoes and air-to-surface missiles such as the Fairchild Petrel. Three XHSL-1s were ordered, the first of these flying on March 4, 1953, followed by a production contract for 78, including 18 destined for the Britain’s Fleet Air Arm. None were destined to serve operationally.